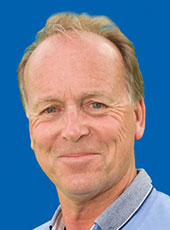 Guided the San Diego Aviators as head coach for the fourth straight year since 2016. Named 2016 WTT Coach of the Year prior to leading the Aviators to their first King Trophy in team history.

Previously won WTT Coach of the Year honors in 1990 with the Los Angeles Strings after helping the team (as a coach and a player) to the Championship.

Works for BBC as a commentator at the four Grand Slam tennis events.

A former Australian Open singles finalist and winner of one singles and two doubles titles on the ATP World Tour.